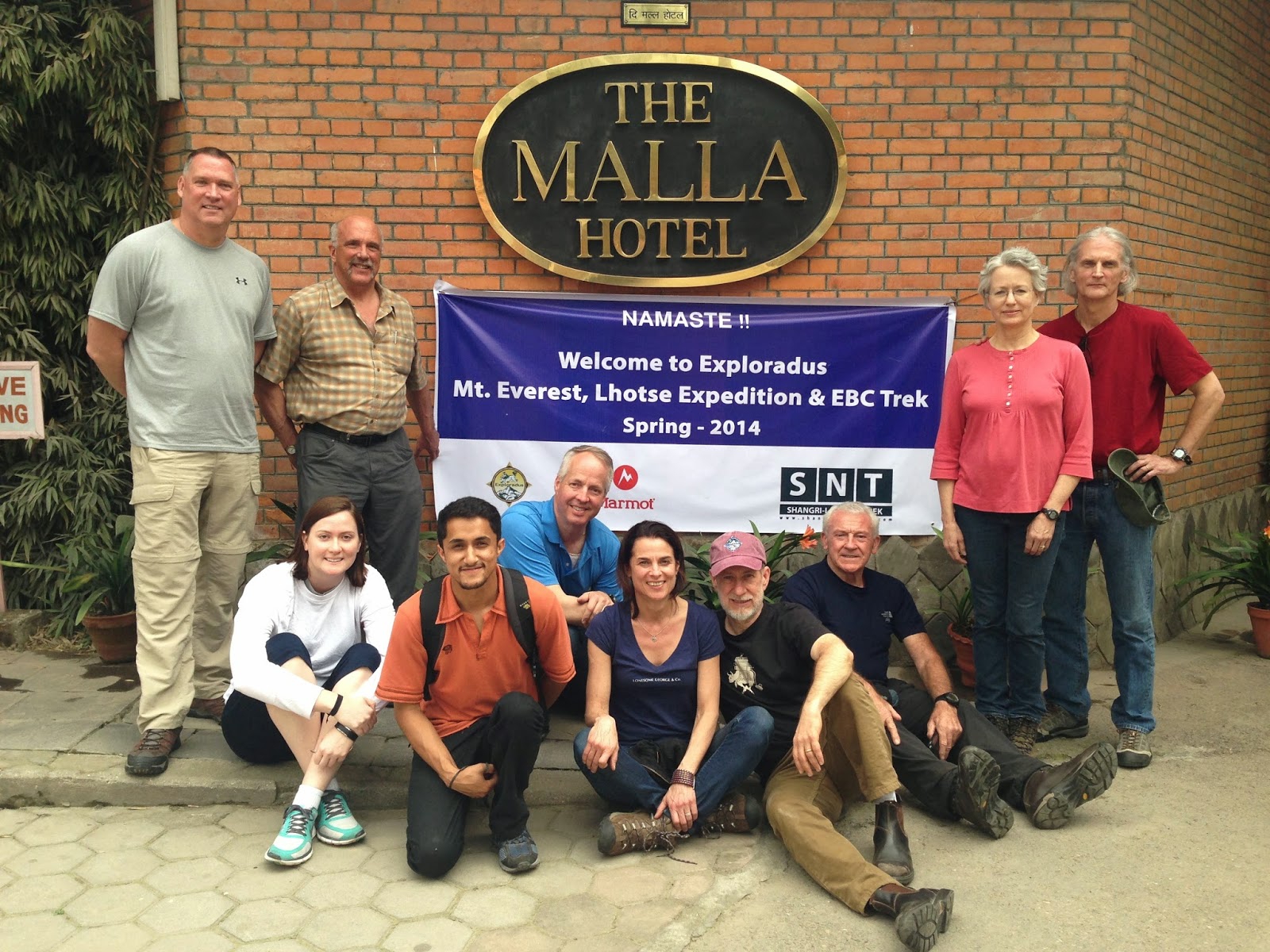 After a year of planning, training, and getting ready for this climb, we finally left Durham on Wednesday evening with four large gear bags each weighting 50 pounds and three 50 pound boxes of food and supplies. We arrived safely in Kathmandu on Friday without a hitch. Our direct seven hour flight to London was pleasant and after a short layover we were off to Delhi. Nine hours later we were in Delhi at just before midnight. It took two hours of working and waiting with the airport transfer hotel to make sure all our gear bags were going to be on our flight to Kathmandu in the morning. We finally checked into the transfer hotel around 2:00 am and had a couple of hours of sleep before waking at 4:45 to go to our gate for the 6:30 flight to Kathmandu.

It's great to be back in Kathmandu. This crazy chaotic city is bustling with activity. Arriving at our hotel we saw our old friend Jetha. He was our trekking guide in 2007 and will again trek to base camp with us and be our base camp cook. Our first order of business was to go food shopping and get a local cell phone.

We spent Saturday touring Kathmandu. We had an interesting experience touring a famous Hindu temple and crematorium funeral site down by the river. Hindu religion requires that the dead bodies be cleansed in the river water and then burned over an open fire. We witnessed several funerals taking place and the burning of bodies. Once the bodies are burned the ashes are sweep into the river. Later we visited the large Boudha Stupa, one the holiest Buddhist temples. Our final stop was another Buddhist temple on a hill called Swoyambhu or more commonly known as the Monkey Temple because of the hundreds of monkeys that climb around everywhere. Later Barbara and I wandered around the Thamel shopping district of Kathmandu and explored the endless confusing streets.

Except for Jeff, who will arrive in a few days, the rest of our team arrived today. The team consists of Barbara and me, Martin (Irish by birth, but he has lived in Australia most of his life), Danny and Carol from Texas, Steve (raised in Alabama but lives in China) and his daughter Lauren who now lives in Knoxville,  Jim our leader, Scott our base camp manager, and Jeff our guide, all three from Jackson Wyoming. I'm very pleased with our team.

Today is Sunday and tomorrow we fly to Lukla to begin the trek to base camp. Lukla is the jumping off point for any Everest climb or trek. It's also famously known as the world's most dangerous airport. (I hope Barbara's family and my family doesn't see that sentence). The runway is situated on a hill at a 12 degree angle up hill. Once the plane touches down all engines are gunned hard to bring the plane to a stop. Even more interesting is the take off when you simply drop off into the valley. It's rare to take off in a plane and go down and not up.

Our first day's trek should take us to a small village called Monjo. We are all doing well and looking forward to getting this thing started. Look for our next post in a few days from Namche Barzar.
Posted by Shane Jones at 3:53 PM