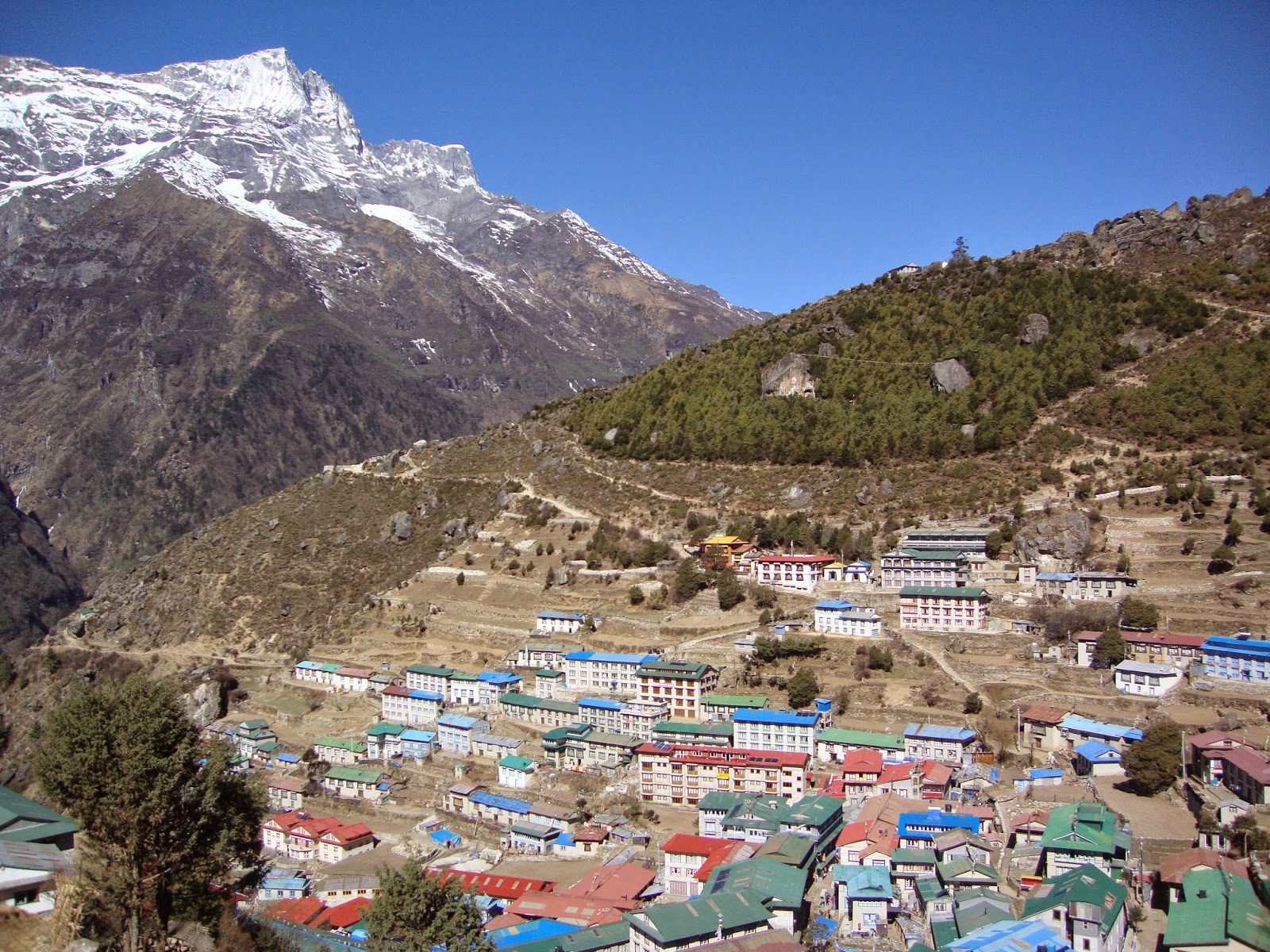 We had an uneventful flight on our 18 seater plane out of Kathmandu to Lukla. We were one of the first flights out and very lucky because there are times when it takes all day, even several days, to get out. It's a breathtaking experience to see the short runway surrounded by mountains through the front cockpit window as you bank right to approach the uphill landing strip. It looks so freaking small. The plane never turns the engines off and you're soon standing on the tarmac being instructed to keep moving away from the running aircraft. You round the small terminal building and you're greeted by hundreds of staring faces, mostly porters, each hoping to get a job carrying your duffle bags up the mountain. It's damn tough works and it's impressive to see the massive amount of weight these guys carry.

After a short tea break to gather our bags and and repack our daypacks we were off on our six hour trek to the village of Monjo. Barbara and I have both been amazed at how familiar being back in Khumba feels. Our teahouse in Monjo provided an excellent oil free vegan meal of potatoes, greens, rice, and dal. Even oil free popcorn. So far the vegan oil free diet is working well and the teahouses have done well accommodating my diet.

Yesterday we arrived in Namche Bazar, at 11, 200 feet, after a four hour hike up hill. We'll spend a couple of days here to maximize our acclimatization. It's a stunning trek into the Sagarmatha National Park, the gateway to the Khumba Valley and Mt. Everest. We crossed the fast moving glacier river multiple times on suspension bridges cloaked in hundreds, if not thousands, of Nepalese prayer flags blowing in the wind. Each of the five differently colored flags represent sky, air, fire, water and earth.

I hiked the last hour slowly up the valley to Namche Bazar alone in my thoughts. There are many memories from my last trip to Nepal, and of course, many thoughts about what lies ahead for me trying to climb Mt. Everest. It's nice to occasionally walk alone each day and have a few minutes to think, but it's great to have a group of people all moving towards the same goal.

I was greeted at the gate to Namche Bazar by three adorable little Nepalese girls about 4 or 5 years old, asking for chocolate. I said "no chocolate" several times…and one little girl took my hand and held it as she led me up the steps into the lower part of the village. Her help up those many steps was much appreciated. As I rounded the corner I could hear the little girls repeating to each other, "no chocolate, no chocolate."  Once entering the village, like all villages here, I rounded the traditional white Buddhist Stupa to the left… you must always go left around Stupas to keep your soul pure…The Stupa have prayer wheels around them and it's customary to spin them clockwise as you pass …I spun every one of the prayer wheels on the Stupa, probably 30 or 40 of them…I'll take all the purity and luck I can get.

One of the best things is the amount of time we spend sitting around our teahouse drinking tea, eating, and sharing our life histories. The stories range from hilarious to very moving. All are entertaining and it's a great way to get to know each other. It's the part of climbing I've always enjoyed the most.

We'll have one more day resting here before we move up the valley further to Pangboche.